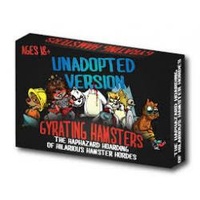 Little known is the darker side of the hamster world. Feast on the new collection of hamsters left "unadopted" to fend for themselves in the cruel world. In this twist on the original game, you see the raunchy, twisted and somewhat demented side of these hilarious hamsters. It will leave you and your age 18+ friends howling with laughter, grimacing with disgust and filled with shock and awe.

Gyrating Hamsters is a hilarious, fast paced, interactive, hamster-themed card game. GH is designed for 2-5 players and takes about 30min to play. The object of the game is to grow your hamster horde to the hamster threshold.

Gameplay: Each turn consists of drawing and playing combinations of hamsters and actions to build your own Hamster Horde, while depleting other Hordes. At the end of their turn, players have the option of combatting opponents directly in winner-take-all battles.

Strategy: To be successful, players must balance building their horde, managing their hand, defending their hamsters, and attacking their opponents. The game is over when the threshold of hamsters is obtained by 1 player.