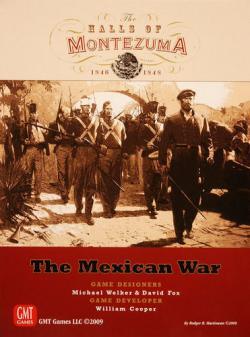 The Halls of Montezuma is a fast paced game of the Mexican War which takes you back to the era of Manifest Destiny. The Halls of Montezuma is a Card Driven Game, allowing players the opportunity to recreate the various events and actions in Mexico from 1846 to 1848. The historical cast of characters is here, from Doniphan to Arista, Scott to Santa Anna. Even Lee, Jackson, Beauregard and Grant make appearances.

Strategy card play allows you to move your forces, make events happen, activate the fleet, secure control of your lines of communication, and even invade Mexico with General Scott.

The outcome is never a foregone conclusion. Victory comes from driving Mexico's political will down to zero; but each battle's outcome is in doubt - a few troops performing superbly can defeat many troops performing poorly. Mexico can achieve a quick sudden-death victory before the U.S. has declared war and can bring its force to bear.

Play The Halls of Montezuma and find out!