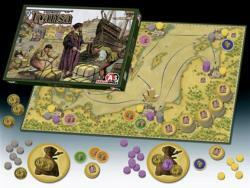 Compete to become Master of the Hanseatic city-states during the 14th Century. Crisscross the Baltic Sea in a merchant ship, always on the lookout for a chance to acquire valuable wares.

Set up networks of market booths within the cities, which allow you to resell the goods at the right time, thus increasing your wealth and power. End the game with the greatest profits to emerge the winner!

All copies come with the Compass expansion. Before starting the game, place the compass, on edge, on a smooth surface and spin it like a top. When the compass has stopped spinning, place it, without changing its orientation, onto Gotland. The face-up side of the compass determines whether the merchant ship follows the routes in the direction of the arrows or against the direction of the arrows. The compass influences all ship movements during the entire game.