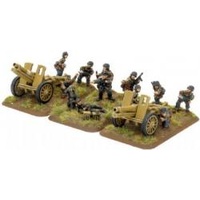 
The 15cm siG33 gun has been a reliable infantry gun for many years, and it will continue to lend its devastating fire support to our troops!

The gun entered service in 1933 and proved valuable in the early months of the war. The 15cm artillery could be used to clear enemy bunkers and trenches. It was particularly efficient at levelling enemy occupied buildings, making it a great asset to urban pacification.

An infantry gun platoon is an extremely flexible asset on defence. They can provide indirect and direct fire support in pinning assaulting infantry or removing a nasty enemy machine-gun.