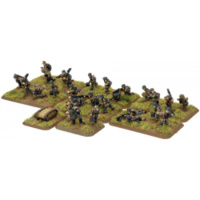 During the campaign in Italy, the Pioneers of the Hermann Goring Division were called upon to perform all the specialist engineering tasks. They were charged with laying minefields, preparing bunkers and other defensive positions.

Armed with rifles, machine-guns, shovels, picks and plenty of explosives, the Pioneers were ready any situation that may have arise on the battlefield. Stead fast in defensive against infantry, the explosives they carried could quickly become an effective anti-tank weapon against enemy tanks. While their flame-throwers lead the way when counter-attacking to retake lost positions.

The Pioneers of the Hermann Goring Division are the cornerstone of your defence. Always available to dig-in and hold the line against attacking Allied infantry their prowess is critical in successfully holding a key objective.