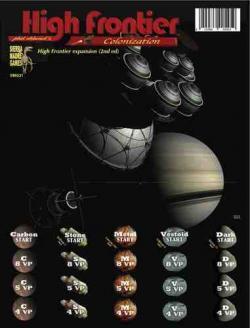 High Frontier Colonization is the 2nd edition expansion to both the first and second editions of High Frontier.

The second edition High Frontier expansion, for 1 to 5 players, contains everything in the original expansion plus rules, cards, and game pieces for four new card modules (i.e. three new card types to research and one new starting card), one new endgame module, seven new operations, and one new movement. It plays using the legacy expanded rules, with these added features: