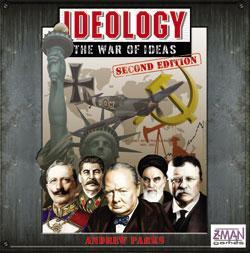 The conflict of political ideas spawned the conflicts of the 20th Century. More than any other era in human history, nations defined themselves not merely by their military or economic might, but by the ideals that inspired their ambitious achievements.

Ideology: The War of Ideas is an exciting new strategy game by Z-Man Games. During the game, each player symbolizes one of the 20th Century's most powerful Ideologies: Capitalism, Communism, Fascism, Imperialism, and Islamic Fundamentalism.

Beginning with one global region completely under its sway, each Ideology attempts to influence and control the independent regions of the earth. The Ideology that acquires the highest level of global influence will dominate the world for generations to come!

This second edition includes enhanced graphics, variant rules, and variant abilities to 4 of the 5 Ideologies in the game. Also, we added more Influence cards.