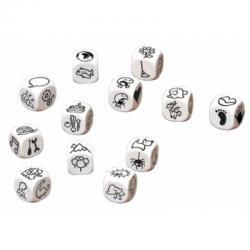 Imagidice!, first released in the early 2000s as Talking Dice, is primarily a storytelling device, with players rolling the six-sided dice, then using the images on them to create a story one die at a time. While initially developed in order to assist students with language learning, particularly a secondary language, Imagidés can also be used for games.