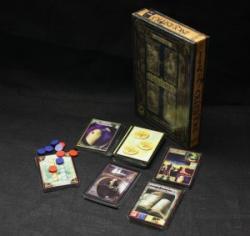 In the year 1609, the Spanish inquisition launched a massive campaign to root out witchcraft and heresy. Their methods were brutally violent and confessions were often squeezed, strecthed or burned out of the unlucky suspects.

In Inquisitio, the players take the role of prisoners in the dungeons of the inquisition. Their goal is to survive the tortures alive and sane, whilst not confessing to too many crimes of witchcraft. The interrogators use their inhumane methods to look for certain features of witchcraft the players might have, and which are telling of the nature of their relations with the forces of evil.

Surviving in the dungeon is done by bribing the guards with money brought in by concerned relatives and cleverly shifting blame to the other players when the chance arises. Sometimes though, the prospect of torture is inevitable. In these situations it is important to assess the physical and mental dangers posed by the torture, and weigh them against the seriousness of the charge. Sometimes it is easiest to avoid being hurt by confessing, as this desperate measure may save the player from crippling bodily harm or mental pain.

At the end of the game it is time for the final trial. The Guilt points the surviving players have gained from their Features and Confessions are counted up, and the player who ends up with the most points is burned as a witch. The player who survives out of the dungeon in the best condition and with the lowest Guilt points wins and is free to walk, at least until the next time they fall under suspicion!