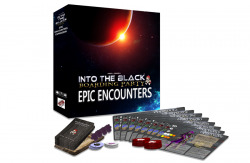 Just when you thought you had this, that this boarding was like a walk in the park, suddenly you can feel something ominous approaching. Who, or what, could it be? Will it be friend or foe?

Find out with the Into the Black: Boarding Party EPIC ENCOUNTERS Expansion!

Face fearsome enemies or earn their favour and loyalty.
Collect epic loot to improve your chances of survival and fame.

*Requires Into the Black: Boarding Party to play

Breach the airlock, blow the doors, board an enemy star ship, loot and plunder, complete your objectives and survive!

Into the Black: Boarding Party is a semi-cooperative space pirate dungeon crawl with a hidden traitor element.

You are a fierce band of space pirates who have boarded an enemy vessel, set on accomplishing your mission while each pirate has their own secret goal to fulfill.

Explore and loot the vessel of its bounty, fend off a seemingly unending wave of enemy defenders and encounter a potentially lethal series of events around every corner; All this while keeping morale high as the clock ticks down to your potential capture.

Be wary of the the traitor lurking among you, out for personal glory at the expense of the rest of the crew!

Will you make it off the ship with all of your goals accomplished and your crew intact? Find out in Into the Black: Boarding Party!