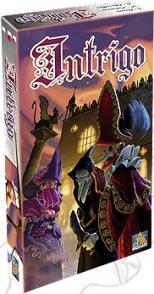 Plotting on the canals!

Strengthen the alliances which allow you to become the new Doge of Venice!

Each player receives a Family card tied to a color of Plot card. The game board is then made up by placing Arcade cards in a square shape at the center of the table. On each Arcade card a Ducat or Seal token is placed.

A turn takes place over three phases. In the first phase, each player receives 4 Plot cards, keeps one and hands the remaining 3 to the next player, who will keep one and hand the rest to the next player and so on, until all players have 4 cards in hand. During the second phase, the players can place a Plot or Influence card (bought with Ducats) between Arcade cards. Influence cards allow the elimination or the switching of Plot cards, etc. Once all the spaces between Arcade cards are filled, the players get the Ducats and Seals they've won using their Plot cards. When everything's  been claimed, all the Plot cards are removed from the board, tokens are placed on the Arcade cards again and a new trun begins!

The first player to gain 5 different Seals or 4 identical ones wins the game.