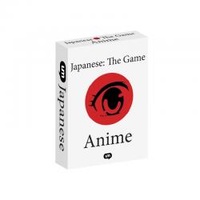 The Anime deck helps you become more fluent with words heard in Anime (and some manga) and in conversations about it, such as Fanatic, Space, Magic, Shut up, and Upperclassman.

Expansion decks are shuffled in with the main deck to accommodate more players (the game plays 2 by itself and needs either an additional core deck or an expansion to accommodate more), or just to add less common words to the mix for 1-2 players.