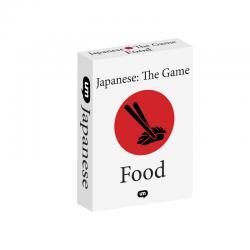 The Food expansion focuses on Japanese food and the enjoyment of eating it. It contains Japanese food-related nouns, verbs, adjectives, adverbs, and a few particles for balance. Examples include Ramen, Sushi, Tempura, Eat, Cook, Fry, Delicious, Nightly, and Never.