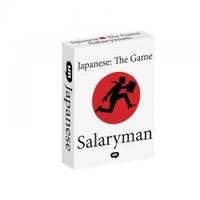 We’ve all been there, dead tired after a long day at work, and the Japanese are no different. An entire culture surrounds the life of your average white-collar worker, and this is a deck that brings some of those concepts into your game. Not only are there words for your typical office work space, but terms for your superiors and fellow co-workers. At least playing with the Salaryman deck is a lot better than being at the office!