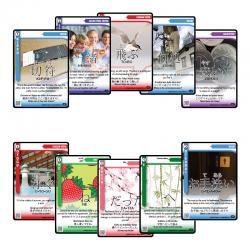 This 36-card Travel Expansion is geared to teach you words you’ll need to get around in Japan. Words like Hotel, Where, and Bathroom as well as Pay, Taxi, Fare, Train, and Ticket will make your adventures in the Land of the Rising Sun more comfortable and less stressful.