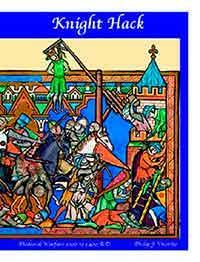 Knight Hack is designed for historical gamers and students of Medieval Warfare. The book is period specific and is used in recreating medieval battles in miniature. It is recommended for specific historical battles and various scenarios. This book is idea for educators who wish to introduce their students to history. It assists in developing, reading comprehension, math and statistical skills as well as problem solving skills.

Knight Hack originated more than 15 years ago. Since then it has been presented in demonstration games all along the east coast of the United States and Canada as well as on the west coast. With this wide exposure the rules have changed little in basic mechanisms, however, the changes are profound without the loss of the original historical flavour or desire to express history through miniature gaming.

The primary and most obvious difference is the D-10 system for mechanics. Not a big deal in itself, but it has proved to be easier for players to grasp and consequently speeds up play. The other and perhaps most important change is the predetermined unit creation through Q.R.S. (Quick Reference Sheets). This removes the necessity for the player to do a lot of unit design. Players can still easily build armies of their own, too. The third change is the dropping of the abstract and usually unsatisfying need to somehow create a clumsy relation between Li, Lmi, Hi, He, and Lc troop types with what actually existed. Somehow non of the armor or formation types ever really melded together very smoothly. Predetermined unit information resolves many of the inaccuracies of using the traditional method of creating armies. Each army list has its own specific Q.R.S. Consequently for good or bad I have lumped them together relying strictly on a figure per stand basis. It works for me and certainly works for those who have played in the many demonstratoin games.

Many of the ideas and ideals expressed here cross over established gaming traditions. I encourage players not to fight balanced armies which face off on a level playing field in relation to balanced armies in points (which really don’t work anyway) and in relation to the terrain surfaces the combative forces in miniature rush across. Seldom in history have armies been equal in composition, quality or size and certainly terrain seldom lends itself to be good ground for both combatants. It is the combination of selecting good ground and then maximizing the army’s ability to fight in specific terrain. The great leaders know how to gain good ground and then lead their army to victory against what often seemed to be an insurmountable enemy force. This is the real game and separates the historical gamer from the ordinary gamer. The rules using this perspective are different from any other. -- Philip J. Viverito