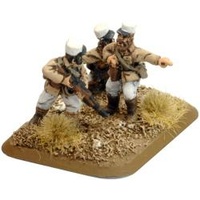 While the French army of the Napoleonic wars were well supported by Sapper units, during the 19th century these specialists gradually disappeared except in the Legion.

These long service veterans are the best of the best and retain many of their ancestors’ unique symbols such as the long leather apron, an axe, and the large beard. Sapper units were not expected to live long and thus were granted such luxuries as the iconic large beard, which was otherwise strictly forbidden.