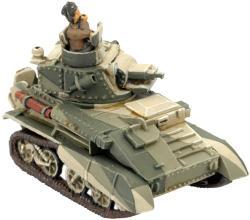 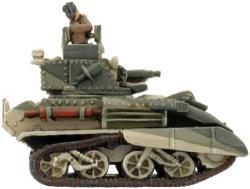 The Light Tank Mk VI series entered production in 1936; by the outbreak of World War Two, these vehicles were in wide spread use by the British Army. The bulk of the British tank forces serving in France in 1940 with the British Expeditionary Force (BEF) were comprised of the Mk VI series.

By 1940, when the Vickers Light Mk VI B tank was going into action in North Africa, its light armour (a maximum of 14mm) and light armament (a water cooled Vickers .303” and a Vickers 0.5” machine-gun) meant it was considered only capable of performing a reconnaissance role. With a top speed of 56 km/h (35 miles per hour) it was quite capable at these tasks, and they caused the Italians some problems with their speed.

However, the British Army’s lack of armoured fighting vehicles in North Africa meant that the Mk VI B light tanks were often pressed into service as battle tanks leading to heavy losses. Although it performed with distinction, by the middle of 1941, only a single squadron of these hard working little tanks remained.

The Light Tank Mk VI B in Flames Of War

The Light Tank Mk VI C in Flames Of War