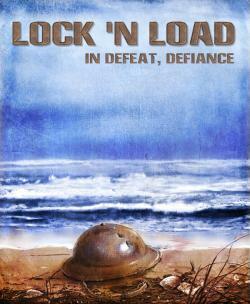 The 170 counters include Vickers, Cruiser, and Matilda tanks, Bren carriers, 2pdr and 25mm Anti-tank guns, 51mm mortars, Leaders, heroes, snipers, Squads, Bren guns, Boys Anti-tank rifles, and much more. The fourteen scenarios, all designed by Dale Holmstrom (The Swift and the Bold) and Mark Walker, cover everything from British and SS fighting near Arras to Rommel crossing the Brasse Canal.

The Canal
An allied defense line using the Brasse canal had been successful in stopping the relentless advance of the German Army. The British were so stubborn that General Rommel went to the front lines to reconnoiter the situation.

Squeezing Limeys
The Allies were determined to hold onto all of the major seaports as long as they could. Calais had traditionally been a crucial strongpoint in channel crossings. Most of the city was made into a makeshift fortress. The 1st Panzer Division squeezed the stalwart defenders into a smaller pocket. The British used the north canal as a defending line and waited for the final onslaught.

The Price of Arrogance
The noose was tightening on the beleaguered allied forces. Curiously, Hitler had ordered a halt to the blitzkrieg. Sepp Deitrich, Commander SS Leibstandarte Adolf Hitler, on his own initiative, decided to push the attack. British troops were assigned to delay the German advance around the town of Wormhout to prevent the destruction of the evacuating forces at Dunkirk. Deitrich expected light resistance: a near fatal error.

One Last Steak Dinner
The British 51st Highland Division was being squeezed into a small pocket around the town of Dieppe by Erwin Rommel and his 7th Panzer Division. Rommel was doing his best to capture the division before it could escape across the channel.  The men of the 1st Black Watch were ordered to hold the middle of the perimeter against Rommel’s panzers. After preparing their positions, the Highlanders shot a cow to supplement their rations. With full bellies, their idyllic afternoon in Normandy was forgotten as they heard the sound of German tanks approaching.

Kick ‘em Out
German infantry of the 7th Panzer division had infiltrated the La Bassee Canal defense line and had established a small bridgehead. As German engineers were building a pontoon bridge over the canal for reinforcements, a combined Allied infantry-armor counterattack struck the defending Germans.

I’ll Take the Low Road
The 2nd Panzer Division had the port of Boulogne as its final objective. Resistance had been stubborn on the southern approaches. Aerial reconnaissance revealed that the low road by the village of Outrea would be the most advantageous route into the city.

Death’s Head at Arras
As the 3rd British Infantry division attempted to withdraw to prepared positions at dusk, the Germans attacked the remaining rear guard elements. Hand-to-hand fighting broke out as the Irishmen of the Royal Ulster Rifles made a desperate stand to prevent the annihilation of their division.

This is not a stand-alone game. You must own Heroes of the Blitzkrieg to play In Defeat, Defiance.