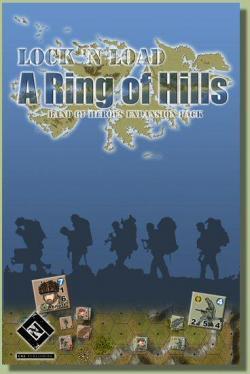 Mark H. Walker's Lock 'n Load: A Ring of Hills brings the immersive Lock 'n Load tactical gaming system to the windswept group of islands east of Argentina. In 1982 Argentina invaded the Falklands, or Malvinas as they are called in Argentina, easily defeating the occupation platoons of Majors Mike Norman and Gary Noot. This invasion set in motion what many have called Great Britain's final colonial war.

A Ring of Hills covers this colonial war from the initial Argentine assault to their final capitulation. Included in the expansion are counters for the Argentine and British combatants, such as Royal Marine Commandoes, Paras, Gurkhas, and the Falkland's Territorial Defense Force. The Argentines make muster with conscripts, Marines, and commandoes. There are armored fighting vehicles, such as the AML-90, Scimitar and Scorpion, helicopters, Harriers (yes, harriers), and even ship counters... nothing like steaming in close and supporting those troops with direct fire from a corvette's main gun!

Five geomorphic maps ship with the expansion. Maps that cover everything from the ring of hills surrounding Port Stanley to the bare tundra leading to Goose Green. It's everything you need to game the conflict. Well, almost everything. Keep in mind that A Ring of Hills, is an expansion. You'll need Band of Heroes to play it.

A Charles S. Roberts award winner, International Gamers Awards Game of the Year, and voted by Game Magazine as one of the top five conflict simulations. Everyone is playing Lock 'n Load. Shouldn't you be doing the same?

You must own Lock 'n Load: Band of Heroes to play Lock n Load: A Ring of Hills.