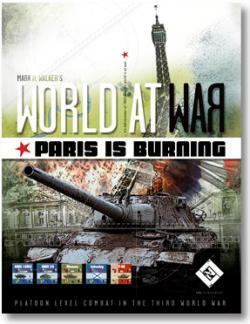 The Soviets have broken through the NATO line in West Germany, and the West German, British, and Americans are in full retreat. They approach the French border, hoping for aid, praying for sanctuary, but the AMX-30 tanks on the far side of the border fire, their shells ripping into the approaching NATO troops. Thus starts another chapter in the World at War series.

Paris is Burning brings the French into the flaming battlefields of Europe. Zealots, patriots, and determined to defend their homeland, the French battle any army that crosses into France. Paris is Burning ships with two 11” x 17” geomorphic maps, 176 eye-popping counters, player’s aids, and module rules, all tucked neatly into an attractive box. Paris is Burning is an expansion for World at War: The Untold Stories.

Cracking the Nut
The Soviet Third Shock Army attacks the French 2ème Corps d’Armée in West Germany. Interesting scenario in which the Soviet player may choose his order of battle and objectives.

Turn About is Fair Play
The 1e RC, supported by surviving elements of the 35e RI, counterattacks the Soviet bulge from the previous scenario. This one is nice for some AMX30B-2 action.

On the Wings of Angels
Part of the French plan for supporting NATO, as well as their own forces within West Germany, was a series of disruptive strives by paratroopers and commandoes into the rear area of the Soviet forces. On May 15th one such strike went horribly wrong. The paratroopers of the 1e RCP landed within 1500 meters of their objective, a Soviet airbase. They quickly seized the base, and destroyed the Mig-29 fighters stationed there. Soon their support, eight AMX-13s were flown in. Everything was going well, that is until they learned they had landed in the middle of a Polish mechanized division. What they didn’t learn—at least until much too late—was that the Polish commander, General Kruszewski, had given orders to slaughter every single paratrooper. Dark, desperate scenario. Can airpower and missile strikes save the day?

Mes Amis
Team Dahl approached the French border seeking refuge. The 6e RD nervously defended that same border, well understanding that the Soviets had already defeated everything thrown at them, including the 2ème Corps d’Armée. When the Polish T-72s attached to Dahl’s forces crested a rise overlooking the border, the French fired at the familiar enemy silhouettes, throwing the forces from the two allied nations, into a bloody skirmish. Hey, we did the screenshot, we had to do the scenario, right?

The Long Haul
The border incident had been a tragic mistake. Men’s minds, clouded by fatigue, weeks of war, and maybe something worse, made a poor decision and now friends, Americans and French, lay dead. But there was no time for grieving, that time would come later. The mistake had been realized and the battle stopped. Close behind the Americans an amalgamation of British soldiers and tanks, calling themselves the 4th Royal Tank Regiment crossed the border. Mike Hudson wasn’t sure what happened to the first three tank regiments, but if they were in as bad shape as the fourth, he wasn’t sure he wanted to know. But of course, none of that mattered, because the Brits said the lead element of a Soviet tank division was no more than an hour behind. The officers went off to do their officer thing, although Sgt Dahl was the closest thing the Americans had to offer. When they returned, Dahl announced that they wanted a defence in depth. That didn’t matter to Hudson. All that mattered to Hudson was that the British, not he and his men, would be left behind to fight for the river crossing. A mini-campaign fought over three boards, each separated from the other.

They are steel, and they are doom.
A hard rain began after Dramonovitch’s tankers finished mopping up the remainder of the French Armor. It was as if the sky itself was weeping. The rain fell in buckets, rapidly turning the already wet French countryside into a quagmire. The battle had been hard, harder than he expected, but then again, nothing came easy in this war. Army command told him to regroup, rest, and refuel. They were passing through an East German brigade to exploit the hole Dramonovitch’s men had opened. Difficult choices in this one. The Germans must choose to advance across the rain-drenched meadows or massacre French civilians clogging the road.

The Beginning of the End
Relentlessly. The Soviets pushed on. The Americans were exhausted, their RFORGER units severely depleted, England had withdrawn from the fight, but the French would not give up. Neither would they give up their beloved City of Lights. After a day of fruitless negotiations, the Soviets launched the first tentative probes on the city with elements of the 15th Recon and 3rd Marines. Neither side wanted to commit the final reserves. The probing, however, was no more than a decoy. Behind the scenes, the Soviets had infiltrated a Spetsnaz company with the sole objective of killing French President Mitterrand, hoping that his replacement might be more willing to negotiate.  The Soviets must kill Mitterrand, but can they find him?

The End
The Soviets didn’t find Mitterrand; they found Jacques Lefebvre, a French patriot who served as his body double, so Mitterrand lived. Later that same morning elements of the French Foreign Legion threw the last few Soviet troops back from the Arc de Triomphe. Paris stood defiant. There would be no peace. Warsaw Pact faced NATO in a battle neither could afford to lose. Paris would burn. One of the biggest World at War scenarios. Played in two acts.