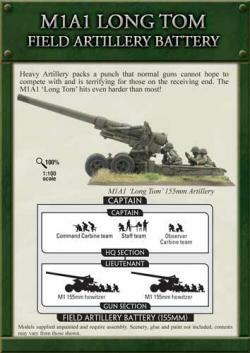 More often than you’d think, the brave artillerymen find themselves under fire from German tanks and infantry as they engage in a brutal point-blank fight. So dedicated are the artillerymen that they will see off the Germans or die beside their guns.

Isolated batteries of shattered divisions, and bypassed corps assets, such as the formidable M1A1 155mm ‘Long Tom’ guns fight on until they are out of ammunition. Even then the men spike their guns, pick up their rifles, and join the first US platoon they meet to do their part in the defence of the ‘bulge’.

Heavy Artillery packs a punch that normal guns cannot hope to compete with and is terrifying for those on the receiving end. The M1A1 ‘Long Tom’ hits even harder than most!