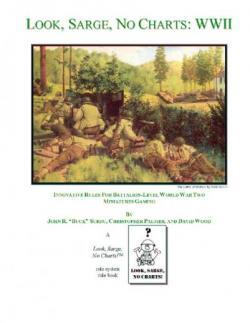 A challenging approach to studying warfare during the Second World War. This book is the result of years of research on the Second World War. It includes information on tactics, weapons, through the use of miniatures. When you play Look Sarge No Charts, you will be challenged and excited.

Two vehicles or ten infantry on a base represent a platoon.

In LSNC, each player commands a battalion of troops; although, I think a player could control two battalions in a pinch. Each base represents a platoon, and to give the visual impression that you are maneuvering units, the rules state that you should mount 10 infantry figures or 2 thanks on a base. In this way, a platoon of tanks, doesn't look like tank. The rules were written for 12mm or 6mm figures.

This is not a "shotgun full of dice, lots of mods, but sixes hit" system. The rules are simple, but certainly not simplistic. There are subtle nuances that come out only when you play them. You will have to make the decisions that are appropriate for a battalion command. You won't be deciding which tanks should be buttoned up and which infantrymen are throwing grenades. If you want to maneuver battalions, this set of rules is worth a look, because they will challenge you without lots of table look ups, pages of modifiers (that are inappropriate at the battalion commander level), and difficult mechanics. All mechanics are consistent and clean.