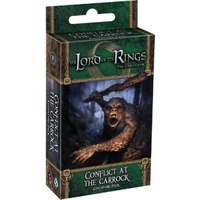 The Lord of the Rings LCG: Across the Ettenmoors Lord of the Rings LCG: The Drowned Ruins Lord of the Rings LCG: Escape from Dol Goldur Nigh Lord of the Rings LCG: the Blood of Gondor

Conflict at the Carrock is the second Adventure Pack in the Shadows of Mirkwood cycle for The Lord of the Rings: The Card Game. Hot on the trail of Gollum, the heroes venture down the banks of the Anduin, only to hear whispers of a new threat looming.

A variety of new player cards offer exciting deck-building options, featuring new and familiar faces. Frodo Baggins is beginning to feel restless in the Shire while the Beorning Beekeepers offer their assistance to anyone willing to help drive the troublesome Trolls away. A Long-beard Mapmaker discovers a hidden Dúnedain Warning that just might help the heroes avoid defeat.

Conflict at the Carrock focuses on the lumbering Trolls terrorizing the Beornings, and while facing them in combat is fearful enough, Sacked! cards will endanger your heroes at every turn. Muck Adders will snap at your heels while you try to navigate the difficult locations surrounding the Carrock.

This is not a stand-alone deck. A copy of The Lord of the Rings: The Core Set is required to play.