Lord of the Rings LCG: Trouble in Tharbad The Lord of the Rings LCG: The Three Trials The Lord of the Rings LCG: The Nin-in-Eilph 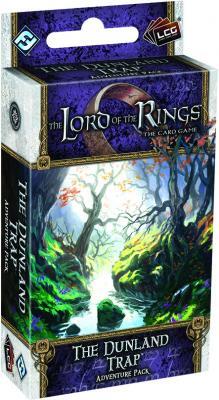 The Lord of the Rings LCG: The Dunland Trap

“The scouts began to return. Some had gone north beyond the springs of the Hoarwell into the Ettenmoors; and others had gone west, and with the help of Aragorn and the Rangers had searched the lands far down the Greyflood, as far as Tharbad, where the Old North Road crossed the river by a ruined town.” –J.R.R. Tolkien, The Fellowship of the Ring

Trouble in Tharbad is the third Adventure Pack in The Ring-maker cycle for The Lord of the Rings: The Card Game. After finding their way through several encounters with hostile Dunlending warbands, a handful of Middle-earth’s greatest heroes arrive at the ancient, ruined city of Tharbad. There, they hope to locate the Dwarf named Nalir, who holds information that the White Wizard believes may prove valuable in the fight against the Dark Lord of Mordor. Finding the Dwarf proves to be a matter of very little difficult, but gaining the information he can provide proves to be a greater challenge…

The sixty cards of Trouble in Tharbad introduce a new hero, three copies of each new player card, and scenario in which your heroes must help Nalir extricate himself from the unfortunate predicament into which he has placed himself. You must battle Orcs, slip through abandoned streets, and seek to elude the spies from Mordor who have also taken an interest in the Dwarf and his information. Additionally, Trouble in Tharbad adds more support for the Silvan and Gondortraits, the Doomed X keyword, decks that keep their threat levels at twenty or below, and more! Lord of the Rings LCG: The Steward’s Fear Lord of the Rings LCG: The Sands of Harad