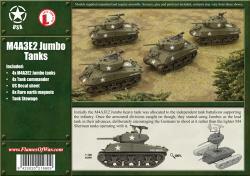 Fears of having to breakthrough the German Siegfried Line led to the development of the M4A3E2 assault tank. The late M4A3 chassis was used with extra armour added all around. Its sheer bulk led to the nickname: Jumbo.

The obvious points to look for on the Jumbo are the thick frontal and side armour plates, making it substantially larger than a normal M4A3 Sherman.

The second is the Jumbo’s massive turret, built especially for the tank. The massive 7”/18cm thick mantlet is particularly characteristic of the Jumbo. One last thing to spot is the tank’s duckbill wide tracks, which had to be permanently installed to deal with the tank’s 42-ton weight!

The M4A3E2 Jumbo entered combat in late October 1944 after the battles in the Lorraine. The Jumbo’s first major actions were in the Ardennes.

The M4A3E2 Jumbo in Flames Of War