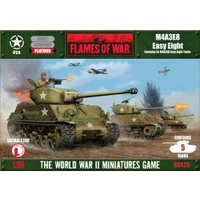 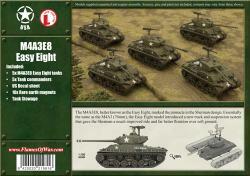 The M4A3E8, better known as the Easy Eight, marked the pinnacle in the Sherman design. Essentially the same as the M4A3 (76mm), the Easy Eight model introduced a new track and suspension system.

The Horizontal Volute Suspension System (HVSS, for short) made it much easier to replace damaged road wheels and a new wide track was developed to improve the tank’s offroad performance. Together this gave the Sherman a much improved ride and far better flotation over soft ground.

The M4A3E8 Easy Eight entered service in late December 1944 during the fighting in the Ardennes and served admirably to the end of the war. It continued to serve in the US Army until 1955.

The M4A3E8 Easy Eight in Flames Of War