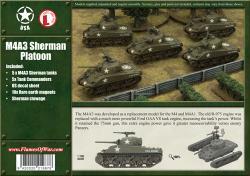 The M4A3 was developed as a replacement model for the M4 and M4A1. There are two major features that you can use to identify an M4A3 Sherman tank. The first is the single-piece transmission housing on the front of the tank, rather than the bolted multi-part housing on older models.

The second major change in the M4A3 was its engine. This version replaced the old R-975 engine with a much more powerful Ford GAA V8 tank engine, increasing the tank’s power.

The M4A3 first saw action as replacement vehicles from August 1944 and served to the end of the war.

The M4A3 Sherman in Flames Of War