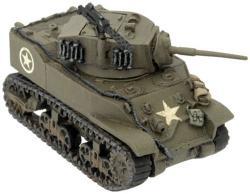 The M5 variant of the Stuart light tank stemmed from the suggestion to the Ordnance Department that the M3 version be fitted with the twin Cadillac engines and the Cadillac Hydra-matic transmission. These components were, at the time being manufactured and fitted to commercial vehicles.

After successful trials, compounded by a shortage of Continental engines, the Cadillac modified version of the Stuart approved for production in February 1942. The new version was originally designated the Light Tank M4 but this was later changed to M5 to avoid confusion with the M4 medium tank or Sherman.

The M5A1 Stuart light tank proved time and again that speed was an essential element of armoured infantry support and flank protection. Armed with a 37mm gun and two machine guns the Stuarts proved themselves to be more than adequate in dealing with the German mobile infantry.

Once the enemy line has been broken the Stuart light tank use their speed to race forward to exploit the break though and wreak havoc behind enemy lines. Their speed also allows them to out manoeuvre slower tanks and take advance of their weaker side armour.