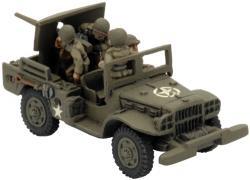 Developed in 1942, the M6 37mm GMC mounted a 37mm M3 Anti-tank gun on the back of a 3/4-ton 4x4 Dodge WC-55 truck. The 37mm M3 gun was only able to penetrate 1.4 inches of armour plate at a distance of 500 yards; and crews quickly discovered the 37mm gun was inadequate when it came to dealing with the German tanks of this period.

After seeing action in the Tunisian campaign, another limitation of the vehicle came to light; the lack of any form of protection left the crew exposed to enemy fire while in action. While the 37mm gun was capable of firing a HE (High Explosive) round, crew members often had to resort to using standard issue infantry weapons in case enemy infantry got to close.

The M6 37mm GMC enjoyed better success in its limited service in the Pacific theatre where it faced the lightly armoured tanks of the Japanese Army. However, as the 75mm gun and 3” Anti-tank guns became available in greater numbers the M6 37mm GMC was declared obsolete by January 1945.