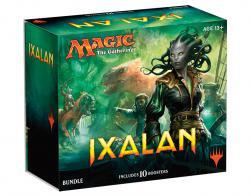 The legendary city of Orazca has been found, but it will not be claimed without a fight. Now, you must outpace, outwit, and overpower your rivals as you vie for control of this ancient metropolis. Succeed, and you will wield the greatest power of the plane.

Ixalan is a plane filled with dinosaurs, exploration and pirates! It is a new plane to the Magic universe, and leads players on a adventure to uncover the mystery of Orazca, city of gold.