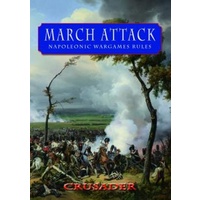 March Attack are a set of Napoleonic Wargame rules that were created to allow players to field approximately a Corps a side and to be able to complete a game of that size within a few hours. Far larger games can easily be played by a group of gamers that have a full day to spare. I have tried to combine the basic game mechanics of morale, melee and firing into a consistent system throughout the rules so that it can be easily mastered. This has allowed strategic options to be expanded as well as army morale and command & control without creating a set of rules that take forever to play or get bogged down in endless details.

March Attack can be used as a ‘club’ set of rules where a game can be set up and completed within an evening but there is no built in balance or points system. Elite troops can be very good and militia can be very poor. Don’t expect to turn up to a game where your Landwehr and Militia are able to stand up to Elite or Guard without some balancing factor in their favour. The rules are not a points balanced, buckets of dice, pick up, competition style game and are best played with historical orders of battle or as part of a campaign system.

The rules have been designed so that turns flow smoothly with a minimum of bookkeeping or reference to charts and most of the basic mechanics should be picked up within the first game. There is a lot of emphasis on the command of large formations with each turn representing 20 minutes of real time. You’ll find that the strategic situation can change very quickly and the timing of orders, bombardment, attacks and commitment of reserves all play an important part. The rules have dispensed with some of the more traditional methods of representing unit size, troop quality, morale and combat ability. Instead these have been integrated into the concept of a ‘Combat Value’ that allows the system to differentiate between troop quality and experience as well as unit size and training without overly complicating the tactical combat mechanics.

A combination of strategic movement game mechanics allowing large formations to manoeuvre about the field with tactical movement and combat rules means that the game keeps a good level of detail while remaining fast paced. Once you commit your brigades and divisions to advance they will not crawl across the battlefield but actually cover ground at a realistic rate until they come to engage the enemy. You’ll find that players have time to develop a plan and actually command their troops in a realistic manner rather than having to rush at their opponents in turn one so that they can actually get involved in the game!