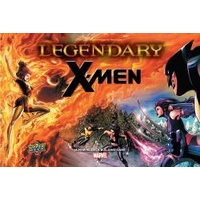 The 13th expansion to the Legendary: A Marvel Deck Building Game puts the spotlight squarely on the X-Men. This set will bring to the game many of the X-Men characters that have been overlooked since the inception of the Legendary game.

This big box expansion has X-Men’s biggest heroes, including Psylocke and Banshee, battling their greatest foes. Even Beast makes a return as an all new X-Men team affiliated Hero!

This will be the biggest Legendary expansion to date with 394 cards of new Heroes, Masterminds, Villains, and Schemes straight from the X-Men comics!