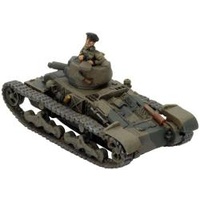 
The BEF’s heavy tank formation, the 1st Army Tank Brigade, consisted of the 4th and 7th Battalions, Royal Tank Regiment equipped with Infantry or ‘I’ tanks (with a handful of light tanks for command and liaison work). As the ‘I’ tanks were designed to cooperate with infantry, they were heavily armoured, almost impervious to German anti-tank weapons, but moved at a walking pace.

Initially, 4th RTR was equipped solely with the machine-gun-armed, 11-ton A11 Infantry Tank Mk I (nicknamed ‘Matilda’ as it waddled like the cartoon duck of that name!). 7th RTR, on the other hand, went to France with new 2 pdr-armed, 27-ton A12 Infantry Tank Mk II or ‘Matilda Senior’ amongst its A11 Matilda tanks.

The brigade’s first action was its famous counterattack near Arras which caused the Germans some consternation and gave a brief, but essential, respite to the BEF. 4th RTR lent a couple of platoons of A12 tanks to 7th RTR for the battle, giving both battalions a mix of the two types.

As a result of losses at Arras, the two battalions were combined into 4th/7th RTR with a mix of A11 and A12 infantry tanks for the fighting on the Escaut Canal.