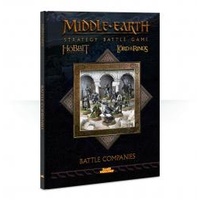 An expansion for the Middle-earth Strategy Battle Game, this 80-page hardback allows you to assemble a small warband and, over the course of many linked games, watch as its members gain experience, learn skills and become battle-hardened. Within the book you’ll find the following sections: - Mustering your Warband: A comprehensive guide on how to raise your Battle Company and ready it for battle. - War’s Aftermath: Once the battle is over, you will have to take stock of its result. Have your warriors improved, gained new skills or maybe even died? In this section, you can work out injuries sustained, determine experience points, tailor Hero skills and calculate the strength of your Battle Company; - Armoury: This is a comprehensive list of all the wargear and extra equipment available to the members of your Battle Company, from adding an armoured horse, elf bow, concealing cloak, company standard, wandering elf, whip and more besides; - Battle Company Scenarios: 12 Scenarios to test your Battle Company against those of your friends; - Adventures in Middle-earth: Special rules for playing games in some of Middle-earth’s more unusual locations, from the tumble-down caverns of Goblin-town to the golden woods of Lothlórien. Includes rules for fighting in the following locations: Lake-town; Forests; Goblin-town; Fallen Dwarf Holds; Haunted Ruins.; - The Quest to Fornost: A Strategy Battle Game first, as we present a narrative campaign made up of five linked Scenarios. Can your Battle Company fight its way across Middle-earth to claim treasures lost in the ruins of Fornost? This quest is designed to take your fledgling Battle Company and provide it with some exciting new battles and adventures to go on against a predetermined force; - Gallery of Battle Companies: 8 examples of Battle Companies that have been put together by a variety of hobbyists to provide inspiration; - Using your Battle Company in Larger Games: guidance on using your Battle Company in standard Points Match games. Including an additional Matched Play scenario (The Grand Battle) to use when both players are using their Battle Companies; - The Battle Companies of Middle-earth: Contains 22 different Battle Companies from The Hobbit™ and The Lord of the Rings™. Each has its own rules and benefits presented in this section.; Minas Tirith; Fiefdoms; Rohan; Arnor; Lake-town; Rivendell; Lothlórien; Thranduil’s Halls; Durin’s Folk; Iron Hills; The Shire; Mordor; Isengard; Harad; Far Harad; Moria; Warg Riders; The Easterlings; Dol Guldor; Goblin-town; Angmar; Corsairs of Umbar. Also included is a Battle Companies Roster Sheet that can be used to record the stats, experience, wargear, special rules and injuries of all members of your Battle.