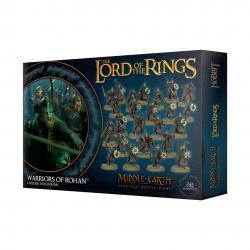 Sworn into the service of the king of Rohan and handpicked by their captains, those chosen to join the Royal Guard are the very finest warriors in the realm of Rohan. Fighting without fear at the side of their king, these warriors spearhead the charge of Rohan’s armies upon the field of battle, polished mail and pointed spears glittering in the sun. Each Royal Knight is an elite, heavily armoured warrior and can be equipped with a sword or throwing spear (both options are included for each model). They are perfect for leading the charge alongside King Théoden or their chief, Déorwine. The set contains 3 metal Rohan Royal Knight miniatures, each mounted on a plastic horse and supplied with a Citadel 40mm Round Base. Their rules can be found in Armies of The Lord of The Rings™.