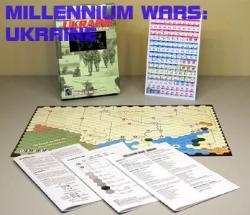 Millennium Wars is a series of strategic-level, two-player simulations of possible current and near-future conflicts.

Each player controls the forces of a belligerent and its allies.

Each player moves his units and executes attacks in turn. While there are two sides in each game, certain scenarios will include NATO intervention on one side or the other.

Standard Game rules gives a basic simulation of modern warfare. Expansion sets include additional rules which give a more complete simulation at the expense of additional complexity.

Each Millennium Wars set uses the same Standard Game rules and tables. Each has its own unique map, counters, and victory conditions.

Millennium Wars: Ukraine presents a possible invasion of Ukraine by Russia later this decade. Scenarios put the Russians in the roles of seizing oil, driving to the Black Sea, or pursuing fleeing rebels while NATO forces move to aid Ukraine. External political events can impact the ability of both sides to prosecute their desired strategies.

A Six-Sided die is also required for play.