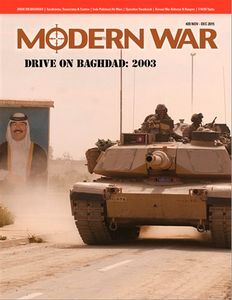 Drive on Baghdad: 2003 is a solitaire game in which the player takes command of Central Command Forces during Operation Iraqi Freedom. Your goal is to defeat Saddam Hussein’s forces in such a manner as to prevent a post-campaign insurgency from breaking out.

The system plays the Iraqis. You will have to deal with a variety of situations, such as: battling Republican Guard divisions, safeguarding your lines of supply, sandstorms, etc., all the while keeping up the momentum in your drive on Baghdad.

The game has two levels: Standard Rules, which give a quick-play game, and the Optional Rules, which add more realism at the expense of increased complexity.

While this is a solitaire game, more than one can play as a team, making decisions by consensus, or with different players managing operations along each vector of Advance.