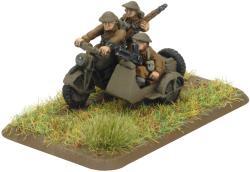 
Motor divisions have a motorcycle battalion like the 4th Royal Northumberland Fusiliers of the 50th (Northumbrian) Division that counterattacked with the 1st Army Tank Brigade at Arras. Their motorcycle platoons scouted for the attacking British infantry tank columns.

Motorcycles are the ideal replacement for horsed cavalry in places like Europe where there are plenty of roads. Their speed makes them perfect for leading the way in every advance.

Note: Motorcycle and Sidecar teams are still Transport teams just like a Kfz 15 field car or any other commander’s vehicle. As Transport teams they have a 5+ Unarmoured Vehicle Save.