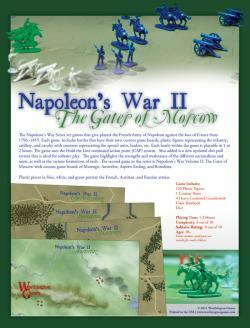 The Napoleon's War Series are games that give players the French Army of Napoleon against the foes of France from 1796-1815.

Each game includes battles that have their own custom game boards, plastic figures representing the infantry, artillery, and cavalry with counters representing the special units, leaders, etc. Each battle within the game is playable in 1 to 2 hours. The game uses the Hold the Line command action point (CAP) system.Also added is a new optional chit pull system that is ideal for solitaire play. The game highlights the strengths and weaknesses of the different nationalities and units, as well as the various formations of each.

The second game in the series is Napoleon's War Volume II: The Gates of Moscow with custom game boards of Marengo, Austerlitz, Aspern-Essling, and Borodino.