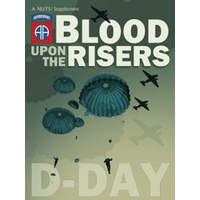 Nuts! - Blood Upon the Risers D-Day

“GORY, GORY, WHAT A HELL OF A WAY TO DIE, AND HE AIN’T GONNA JUMP NO MORE…”
-American paratrooper folk song; “Blood Upon the Risers”.

D-Day, the invasion of Normandy, everyone knows the story. Thanks to the many books and Hollywood we know the major players and the major actions, some even by heart. Pegasus Bridge and Carentan are well-known, well documented. But even the most well-known battles were influenced by smaller and lesser known actions on their periphery, fought doggedly by unknown and unsung soldiers. It is these men and these situations that the scenarios in this book are all about. It’s about sharp skirmishes, stealthy probes, and daring assaults against superior numbers, all the while surrounded by the enemy. Blood Upon The Risers: D-Day is a scenario book for NUTS! - 2nd Edition. It takes place on June 6, 1944 and covers the actions of small bands of American paratroopers of the 82nd Airborne Division during the early parts of Operation Neptune, a portion of the Overlord invasion plan. Inside Blood Upon The Risers: D-Day you will find:

You hit the ground running. You’re a squad leader without a squad and your first job is to find enough men to accomplish your objective. Don’t worry which unit they’re from; you can sort it out later. Can you accomplish your missions and keep your small band of paratroopers alive? That’s up to you but maybe with some good planning and a little luck you just might make it. Welcome to …

BLOOD UPON THE RISERS: D - DAY