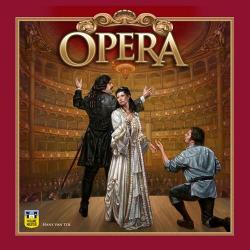 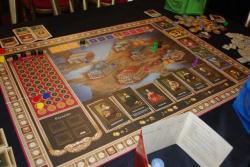 In 1607 Monteverdi's Opera La Favola d'Orfeo had its worldwide premiere. Over the following centuries, Europe was taken over. In the board game Opera, the players bring Opera to the public. In Venice, Vienna, Berlin, London, Paris and Milan great Opera houses arise. Opera leads the players through the periods of Baroque, Classicism and Romanticism. The epic music of six famous composers Handel, Monteverdi, Mozart, Beethoven, Wagner and Verdi will bring the public to their Opera houses.

Clever budgeting is essential to gain control and be the master of your own success. Each round the players determine their budget level to influence the order of play. The budget is also used to hire the different characters in the game.

The Architetto erects main buildings and wings. Hire the attentive Impresario to find great Operas of popular composers. But who can withstand the seduction of the Signora who offers you quick money for gaining the rights of your most valuable music pieces? The elegant Maestro brings the performance of an Opera to a higher level, doubling the income in a city. The acute Critico can make or break a composer. But in the end it is the experienced Esperto who rates the Operas at their true value. Ducats and capacity are important to grow your empire and your influence, but in the end wealth is just an instrument to attain higher ends. Victory points can be acquired in several ways.