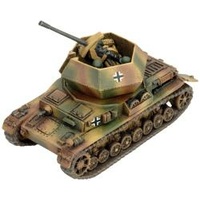 By 1944, the Luftwaffe no longer had command of the air. For the Panzer Divisions this meant an increase in vulnerability to enemy aircraft circling the air space above the battlefield.  To combat this increased risk, a greater reliance was placed on self-propelled anti-aircraft guns.

While the single 2cm FlaK38 of the Flakpanzer 38(t) offered some protection; by the latter stages of the war it was clear that weapons of higher calibre were needed if the remnants of the once formidable Panzer Divisions were to turn the tide of war back in Germany’s favour.

The chassis of the Panzer IV would prove the ideal platform for these heavier weapons systems. The Möbelwagen (Furniture Van) offered an increase in firepower with the 3.7cm FlaK43 but its fold-down superstructure offered limited protection for its crew. To resolve this problem, an armoured turret was developed and used on the Wirbelwind (Whirlwind). This variant mounted a 2cm Flakvierling 38 and could rotate 360 degrees and offered the crew 16mm of armour protection.

While the rate of fire of the Wirbelwind was impressive, the firepower of the Möbelwagen’s 3.7cm FlaK43 gun could not be ignored. Therefore it was logical that a marriage of these two designs would result in the ideal weapon. This union resulted in the Ostwind (East Wind). Mounting the 3.7cm FlaK43 gun in an armoured turret, the Panzer Divisions could finally bring effective anti-aircraft fire on those pesky Jabos.