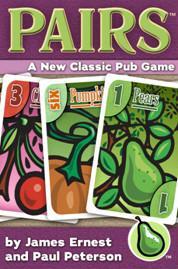 Pairs: The Princess and Mr. Whiffle

Pairs is a "New Classic Pub Game" designed by Origins Award-winning tabletop designers James Ernest and Paul Peterson. It's a simple card game with a basic triangle deck: Just 55 cards numbered 1 through 10, with 1x1 2x2, 3x3, and so on up to 10x10. Players take turns drawing cards and trying not to score a pair. Or, you can fold, and score the lowest card in play. The first player to score too many points loses the game, and there's only one loser!

Phil and Kaja Foglio are the creators of the web comic Girl Genius, along with colorist Cheyenne Wright. This Pairs deck features ten "Muses," which are ancient and powerful clanks from the Girl Genius universe. This deck also comes with the "traditional" 2-player bluffing game, Regent, along with "modern" multiplayer rules for Regent.