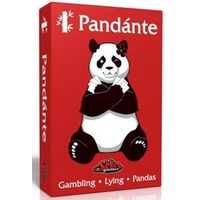 Pandánte is a gambling game played by the Pandas of the Pandalands in the Fantasy Strike universe. In this game, lying is okay. (Humans use the softer term “bluffing”.) You can lie about which abilities you have access to, and you can lie about whether your cards are strong enough to win the pot! And if you win a pot by lying, you gain the favor of a Panda Lord. Be careful, though, because other players can call you out on your lies for fun and profit.

Each round (called a “gambit”), players try to build the best hand they can from their two private cards and five community cards, similar to gameplay in Texas Hold'em Poker. Over the course of a gambit, players bet several times while making claims about how good their hands are and using abilities to influence the game. Each suit gives access to a different ability and if you don’t have the one you need, just lie about it and hope you get away with it.

You can play Pandánte as a social game with a definite win condition and no player elimination, or you can play it as an ongoing gambling game in which players are eliminated when they lose their money, like in Poker. You could even play with real money if you’re Panda enough.