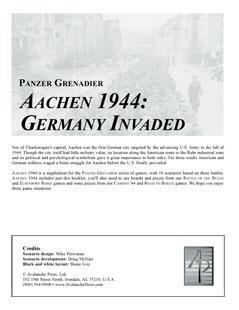 Chasing the defeated German Army across France and Belgium, American troops surged into German territory in September 1944. German commanders initially intended to abandon the first large city in their path, Aachen, but American generals hesitated for fear of bloody street fighting and the Germans were able to dig in and hold for months.

Aachen 1944: Germany Invaded is a supplement for the Panzer Grenadier series. There are ten scenarios, or separate game situations, based on the battles of October 1944 between divisions of the United States First Army driving onto German soil and those of the German Seventh Army desperately trying to keep them out of the Reich.

This module is not playable by itself, but requires ownership of our Cassino '44, Road to Berlin, Battle of the Bulge and Elsenborn Ridge games.