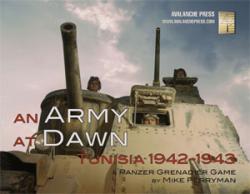 Panzer Grenadier - An Army at Dawn

In early November 1942, American and British forces stormed ashore in French-ruled Morocco and Algeria, beginning a campaign to press the Axis into a small bridgehead around the ports of Tunis and Bizerte in Tunisia. The U.S. Army had its first exposure to combat in the European Theater, while fresh British forces joined the veteran Eighth Army against the Axis. French troops fought first against the Allies, then with them. Inside the shrinking perimeter, German and Italian units continued to offer fierce resistance.

An Army at Dawn is a complete boxed game in the Panzer Grenadier series based on these battles. The game includes four semi-rigid mapboards, with art by Guy Riessen. The maps are fully compatible with many others in the Panzer Grenadier series (and those from Panzer Grenadier (Modern) and Infantry Attacks, too). There are 517 playing pieces: ultra-thick, scorchless, sootless laser-cut. You do not need any other game to play any of its 40 scenarios. Design is by Mike Perryman, creator of Liberation 1944 and Kursk: Burning Tigers among other titles.