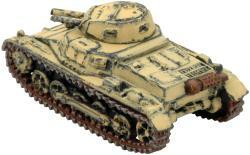 The first attempts to successfully mount a flame-thrower in a German tank were more an experiment rather than a feat of German engineering. During the Spanish Civil War, crews of the Panzer I complained of the woeful inaccuracy of the machine-guns when firing on the move.

One potential resolution to this problem was fitting a flame-thrower, a weapon thought to be better suited for the task at hand and one that didn’t rely on a high degree of accuracy when fired to the achieve the desired effect.

Experiments found that a nozzle of the small back-pack style flame-thrower usually carried by the infantry could be fitted onto the right-hand machine-gun mount within the Panzer I turret.

However, a report dated 30 March 1939 stated that a flame-thrower with much greater range was required to reduce the number of causalities suffered by the crews of these ad-hoc designs.

This experiment was repeated in the desert of North Africa by the Engineers of the 5th Light Division of the Deutsche Afrika Korps (DAK). Capable of firing 10-12 one-second bursts up to a maximum range of 25 metres, the purpose of these tank mounted flame-thrower were to dislodge the defenders of the fortified emplacements of the Tobruk defences.

While these first attempts of placing a flame-thrower behind armour were relatively primitive by German standards, it was however, the first set in the evolution of the German Flammpanzer during the Second World War.

The Panzer I (Flamm) in Flames Of War