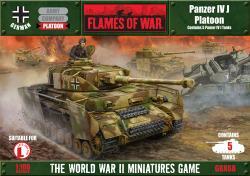 The original Panzer IV entered service before the start of the Second World War, while the last model into production, the Panzer IV J, fought through to the end.

The Panzer IV J retains most of the features of the earlier Panzer IV H, but replaces the power traverse with a hand-cranked system due to shortages of critical materials. Production has also been simplified by removing unnecessary vision slots, reducing the number of return rollers, and other economy measures.

With a penetration of 96mm (3.8”) of sloped armour at 500m, the 7.5cm KwK40 gun of the Panzer IV out performs most tanks in its weight class and can take on any medium tank in existence.

The Panzer IV J in Flames Of War