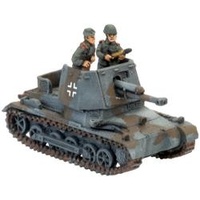 Panzerjäger I (GE100) with two vehicles.

German High Command recognised the need for a specialised vehicle capable of engaging enemy heavy tanks with a weapon of greater penetrating power than the standard 3.7cm PaK36.

To meet this need, they fitted a Czech 4.7cm anti-tank gun in a limited traverse mount on a Panzer I chassis with a gun shield to protect the crew. The resulting vehicle was called the 4.7cm PaK(t) (Sf ) auf Panzerkampfwagen I Ausf B, or Panzerjäger I for short.

The Panzerjäger I in Flames Of War